When a man seems distant or just not as concerned about you as he used to be, it can make you feel so afraid and powerless.

You want to know what’s wrong–if it’s you or something else.

Most of all, you want to do SOMETHING to fix things.

Why does it seem so hard to keep a man’s attention beyond those early days when he couldn’t stand to be away from you?

Now, it seems that something else is always more important–his work, his buddies, his car. You hate to admit this, but when you’re apart from him, he doesn’t even seem to MISS you.

Yet the more painful aspect of all this is that what you’re doing to try to fix things and get him close to you again is actually… pushing him further away.

If you’re anything like me, a man’s distance feels like a threat. You want to be front and center in his life. And when it seems like you’re not, it’s all you can think about.

Suddenly, you start scanning his every move for signs that he just doesn’t care about you as much as he used to.

You have an urge to stop him from slipping away, so you start doing all the things you think will draw him in.

You become extra caring, accommodating, and doting. You become low maintenance so he doesn’t think you’re too much work. You offer to cook for him, rub his back, have more sex. You keep asking him what’s wrong. In short, you’re doing what I call “Overfunctioning”–working hard for his love.

And yet he never stands up and says, “What a fool I’ve been! You’re the most wonderful woman in the world, and I need to shower you with love forever.”

Instead, he gets sullen and moody. He becomes annoyed and angry when you try to get close to him. Maybe he even says those dreaded words: “I need space.”

Then things get even harder.

As you do, do, and do for a man, and he pulls further away, something else happens: you become frustrated, bitter, and resentful.

You hate that you’re putting so much into the relationship and getting so little in return. You still don’t feel like you’re #1 in his eyes, no matter what you do.

The things you are doing to entice a man and pull him closer are actually working against you.

Men fall in love with you because of how much they give to YOU, not the other way around. That’s why they pull away when you try to fix the relationship by giving.

And then when you become frustrated by his lack of reciprocity, you inadvertently push him away even further–because no man wants to be around a resentful woman.

Don’t be hard on yourself, because there’s a reason why you’re operating this way, and it has to do with assuming that what feels good to you also feels good to a man.

“I feel good when a man goes out of his way to give to me, so it must work the other way as well.”

But it’s exactly the opposite.

To get what you want, you have to stop doing what isn’t working, and retrain yourself to automatically and naturally do what does.

This is the way of what I call the Modern Siren–a woman who naturally and effortlessly compels a man to be near her… without her having to DO anything at all!

This can be SO hard at first, especially when you’ve been “fixing” your whole life. But stopping is the only way you will start getting the love, romance, and attention you long for. Not fixing may seem like the last thing in the world you want to do, but it’s the fastest way to make him feel an uncontrollable desire to be close to you again.

Here are three ways to do it:

Close your eyes and think about what it feels like in your body when a man is pulling away from you, or when he just doesn’t seem to think about you as much. You probably feel it in your gut–a lurching sensation that just feels heavy and awful.

Now, what’s happening in your body when you picture a man pulling away and going further off into the distance? Can you FEEL your body wanting to lean forward and doing anything you can to stop him from going away? This “leaning forward” urgency is what causes a man to feel pressured and cornered. That’s why you need to STOP it by doing the opposite: leaning BACK.

That’s right–it’s on him! Wrong. The more you keep your focus on him, the more he will turn away from you. How do you stop? By redirecting all your time and energy back to yourself.

Have you ever been mad at a man for ignoring you, and then when he tries to get close again you give him the cold shoulder? How dare he think he can just waltz right back into your arms!

Yet the most powerful thing you can do in such a moment is to receive him and melt right into him. This might be the most challenging move, but it’s so worth it.

Feel Completely Secure In His Love

I know “undoing” what doesn’t work can seem impossible. It did to me at first. When my husband became distant and disinterested, I wanted to scream. I wanted to fix it. I felt that unbearable urge to make things better. 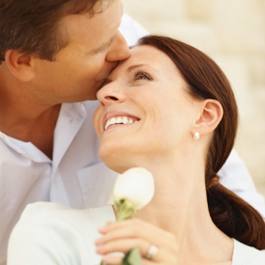 But I knew. I knew that every time I gave into that urge, it never got me what I wanted. Every time I tried to reach out and bridge the gap, the distance got wider and wider–until it felt like my husband was a million miles away from me, even though we were in the same room.

It took me a long time to figure things out, and to replace my negative habits with new ways of being that drew my husband to me–without my even having to THINK about it. But once I “got” it–everything fell into place.

Learning how to connect with a man’s heart is much, much easier than all the pretending, managing and analyzing that you’ve been doing to get love and affection.

In fact, love doesn’t have to require “work” at all. It can be absolutely effortless. All it takes are some very simple shifts in your words and body language.

In my FREE e-newsletter, I’ll teach you how to EXPRESS your feelings and really connect with a man and inspire his love. You’ll learn what BODY LANGUAGE magnetizes a man and how to get his attention without “chasing” him or being fake in any way. And you’ll learn how to create a relationship that satisfies you in ways you never dreamed possible.

When you sign up for my FREE dating and relationship advice newsletter, you’ll learn:

You may have missed

If You Ever Sit On The Toilet For 15 Minutes, This Is What It’s Doing To Your Body

Correct Way To Use A Sanitary Towel

It’s Final: Learn What’s The Use Of That Little Pocket in Women’s Underwear

If Man Has These 15 Habits You Shouldn’t Marry Him